News > New tech being rolled out to combat Covid-19

New tech being rolled out to combat Covid-19 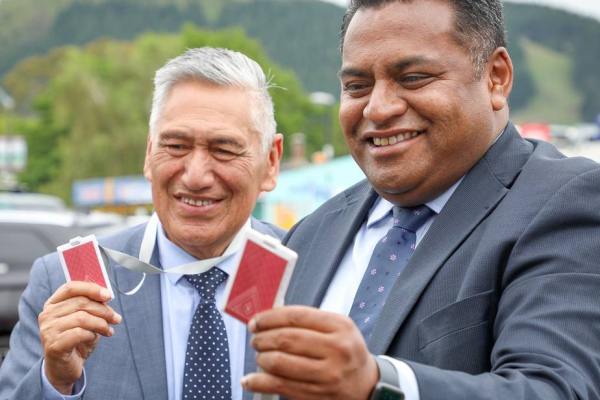 But it’s hard to build the perfect contact tracing beast…

The New Zealand Government is gearing up to trial a new Bluetooth-enabled Covid contact tracing card in the isolated community of Ngongotahā, population 4,850.

Starting next week, the week-long trial will see between 500 and 1500 candidates wearing Bluetooth-enabled CovidCards, to test whether the technology can support contact tracing in real-world scenarios, and in particular, vulnerable communities.

“It may be necessary for Bluetooth LE contact tracing apps to be combined with the adoption of new social protocols to yield benefits.”

It’s a simple system: The Bluetooth-enabled card exchanges signals with other cards located nearby, creating ‘a digital handshake’ and a register of contacts that can be employed to alert wearers who have been in contact with someone carrying the virus. The card does not log the wearers’ identity or location.

With no smartphone required, the card can be worn on a lanyard or belt clip, and could represent a simple, cost-effective way to track those close to confirmed cases of the Covid -19.

The cards are being promoted as having a greater than 90 percent accuracy and the project follows a Nelson trial run by the Department of Internal Affairs.

The Trust says that while contact tracing is a key element in protecting communities during the Covid-19 pandemic, not everyone can use the current incarnation of New Zealand’s Covid-19 tracing app.

“We have the Covid contact tracing app, but not everyone can use it, like those who don’t own a smartphone to download the app or who feel they aren’t ‘tech-savvy’ enough to operate it. It also relies on people keeping their phone charged, on them at all times, and remembering to scan everywhere they go.

But that’s despite the loss of original backers of the project, including entrepreneur Sam Morgan, citing slow progress and ‘active resistance’ from within the Ministry of Health. (Morgan’s team was involved in writing software for the project, promotion and organisation of a factory capable of producing the cards.)

The cards were ultimately supplied by an Australian company.

The Government will use the trial to decide if the card could be rolled out as an additional option of contact tracing.

Efficacy stats are hard to come by, however, and there are some doubts about the accuracy of such systems. Bluetooth technology was not designed for contact tracing and critics fear that the challenges – such as wildly variable signal strength depending on which way a device is pointing, physical obstacles affecting the signal, and nearby objects absorbing or reflecting signals to different degrees – may provide a false sense of security for those attempting to halt the spread of the virus.

Douglas J Leith of the Computer Science and Statistics at Trinity College in Dublin has been studying the potential of Bluetooth systems for proximity detection and says that the technology comes with a fair share of problems, with the development of accurate methods for proximity detection based on Bluetooth received signal strength ‘likely to be challenging and time consuming’.

“We find that in Bluetooth LE [Low Energy] received signal strength can vary substantially depending on the relative orientation of handsets, on absorption by the human body, reflection/absorption of radio signals in buildings and trains.

“Our measurements also suggest that it may be necessary for Bluetooth LE contact tracing apps to be combined with the adoption of new social protocols to yield benefits although this requires further study.”

Meanwhile, Australia’s CovidSafe app has been under renewed scrutiny.

Once described by Prime Minister Scott Morrison as the ‘ticket to a CovidSafe Australia’, there’s plenty of criticism of the app’s AU$50 million price tag and apparent inefficacy. While more than six million Australians have downloaded the app, of the 27,622 confirmed cases, just 17 have been detected via the app, all in NSW.

The DTA is defending the app of course, with chief executive Randall Brugeaud saying that ‘CovidSafe works as is written on the label’ and ‘there is no intention to jettison the current app’.

Turns out it’s hard to build the perfect contact tracing beast. As the human and financial costs are weighed, it seems the price of controlling the spread of the Covid-19 pandemic is still, for now, vigilance.