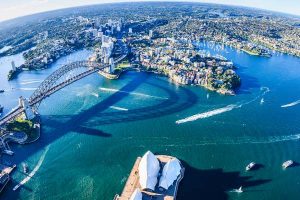 Digital capital of the Southern Hemisphere?…

New South Wales is pushing ahead with its ambitious plans to be the ‘digital capital of the Southern Hemisphere’, with its third pillar – an AI strategy – launched amid promises it will bring ‘thousands of jobs’ to the state.

The AI strategy follows earlier policy releases on the Internet of Things and smart infrastructure.

At the launch of the strategy, held at the University of Technology Sydney, Victor Dominello, Minister for Customer Service was bullish about both the importance of AI for NSW and the state’s plans to lead the Southern Hemisphere in digital.

“AI stands for absolutely imperative for the new New South Wales,” he says.

“As we get out of this Covid period we need to make sure we create a new New South Wales which is technology focused, focused for the future of the people of our great state, and AI is absolutely at the heart of this.”

He says NSW is ‘unashamed’ in its ambition to be the digital capital of the Southern Hemisphere in the next three years.

“This strategy ensures we get there because it is a critical stepping stone to our objective to lead the Southern Hemisphere when it comes to digital over the next three years.”

The AI strategy sees the establishment of a new body, the NSW Government AI Review Committee, which will oversee use of AI across government. It will be chaired by Ian Oppermann, NSW Government chief data scientist, and will work with all government agencies.

The strategy prioritises the development of AI skills in government and the strengthening of industry partnerships ‘through a consistent approach to procurement of AI products and services’.

The strategy was initially due to have been launched in March.

It follows hard on the heels of a number of other initiatives aimed at taking NSW to the top in digital.

Just last month the NSW government launched its Smart Places Strategy, which will see sensors and communications technology embedded into infrastructure. That follows on from the NSW Internet of Things, Smart Infrastructure and Cyber Security policies and NSW Digital Twins, which NSW says is the world’s largest spatial digital twin providing real time information and visualisation for planning. The three policies and the digital twin are all dubbed ‘foundations’ for the Smart Places Strategy and key pushes in NSW’s digital leader goal, which has also seen it commit $1.6 billion to digital infrastructure as part of the Digital Restart Fund.

But while NSW might be playing up its plans for digital domination, it’s not just the policies garnering it headlines, with the details into Service NSW’s April attack released this week, revealing 3.8 million documents, affecting 186,000 NSW residents, were stolen from email accounts.

In launching the Smart Places Policy Dominello said data and precision modelling was just as important as bricks and mortar.

“Information is power and technology should be embedded in every major infrastructure project,” he says.

The AI strategy meanwhile, will bolster jobs across the region, Dominello claims.

“AI is critical to the jobs of tomorrow. We need to invest, to make sure we have a roadmap to create more jobs in AI which then enables other jobs to be created in these smart industries,” he says.

Adds Premier Gladys Berejiklian: “Science, technology, engineering and mathematics will play a pivotal role in shaping our State’s future economy and we cannot be spectators on the sidelines. We must lead and be the engine room for future jobs.”

“Whether it’s at home, online, on the road or at the supermarket, the use of AI is becoming more prevalent in day-to-day life and is often deployed in subtle ways to make customer interactions and services more seamless,” Dominello says.

“This strategy brings together the three key pillars of privacy, transparency and security, within the prism of ethics.”

Across in New Zealand, AI has also been in focus for the Kiwi Government, which last month launched an algorithm charter, which it dubbed a world first. The charter sets out the use of algorithms by public agencies in an effort to assure New Zealanders that data is being used safely and effectively across government.