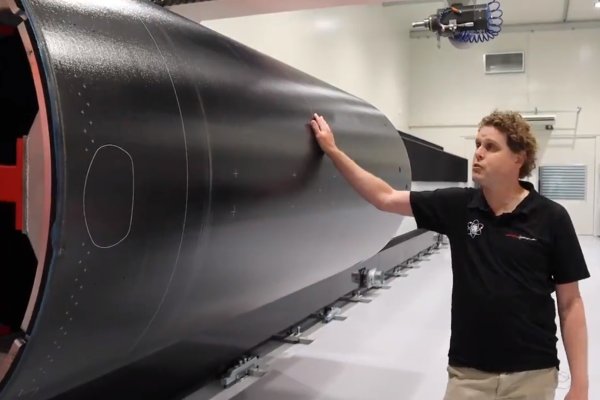 New Zealand is taking its space ambitions to new heights with new government investment – and new robotic assistance to speed up Rocket Lab’s Electron rocket manufacturing as the company moves towards weekly launches.

Unlike most other countries, New Zealand’s space sector is driven by the commercial sector, rather than government, which contributed just $3.8 million in space budget in 2018-19, with MBIE spending a further $6 million to support space science research.

“Recovering and reusing Electron could play a significant role in increasing launch frequency.”

Rocket Lab is the standout contributor for the sector – and is helping lure in new space business for the country.

“Through Rocket Lab, we are home to the world’s leading small-launch provider, and we are attracting other leading international space companies, such as Silicon Valley startup LeoLabs who have built their KiwiSpace Radar in Central Otago says Minister for Economic Development Phil Twyford.

Rocket Lab has already lofted 40 satellites into space. Its next mission – the launch window for which opens on November 25 – will see six payloads from five different countries launched.

Included in the payloads on ‘Running out of Fingers’ are a communications picosatellite from a Spanish non-profit which fits into the palm of a hand and uses low power RF to provide IoT connectivity; a payload from a Hungarian company testing new thermal isolation material and DVB-T band spectrum monitoring; and a satellite for a US-Germany software application development company providing flight tracking services to the aviation sector and apps such as MyRadar.

The mission – Rocket Lab’s 10th and dubbed ‘Running out of Fingers’ – also includes a satellite from Japan’s ALE which aims to create man-made shooting stars by simulating re-entering meteor particles.

The rockets have been designed to burn up on re-entry, however Peter Beck, Rocket Lab founder and CEO, says as the company moves beyond once-a-month missions and towards its goal of weekly launches, recovering and reusing Electron could play a significant role in increasing launch frequency.

Demand for Rocket Lab’s services are running so high the company has turned to industrial robotics to help, launching Rosie the Robot. Rosie enables Rocket Lab to produce one launch vehicle every 12 hours.

In October the company announced plans to offer extended range missions delivering payloads to the moon and beyond using Electron combined with its Photon small spacecraft platform, designed with missions beyond low earth orbit (LEO) in mind. The Electron launch vehicle was designed to deliver small satellites to LEO – an altitude of 2,000km or less. The ninth mission by Rocket Lab deployed a single spacecraft to an orbit of more than 1,000km – more than twice the altitude of any previous Electron mission.

“Just like LEO small spacecraft, many potential exploration instruments and full satellites are on shelves waiting for launch to deeper space,” Beck says.

“In the same way we opened access to LEO for smallsats, Rocket Lab is poised to become the dedicated ride to the Moon and beyond for small satellites.”

Beck says small satellites will play a crucial role in science and exploration, as well as providing communications and navigation infrastructure to support returning humans to the moon.

“They play a vital role as pathfinders to retire risk and lay down infrastructure for future missions,” he says.

Funding winners
While Rocket Lab might be the standout performer locally – and with an increasing global reputation to boot – there are plenty of other contenders lining up to grab a chunk of the $647.3 billion global market, and it’s a market the government is increasingly keen to promote.

MBIE’s latest push for the sector was the $3 million Catalyst Space investment round for satellite and space vehicle technologies, which saw six projects awarded $500,000 apiece.

Among the projects receiving funding is an initiative from Swarm NZ to develop an open source ‘air traffic controller’ software platform to reduce the chance of in-space collisions.

Mitigating collision risk is of paramount importance to every launch vehicle operator, satellite operator and end user of satellite services. Developed in collaboration with LeoLabs, the project will contribute to maintaining a safe orbital environment to enable innovation and support continued scientific and commercial activity, Swarm says.

Dawn Aerospace was also among the winners, with a project to develop environmentally friendly high performance propulsion systems, replacing the use of the toxic, and expensive, hydrazine currently used, and a satellite mission design and control project from Auckland University, which also won funding for a project to keep an eye on New Zealand’s coast and oceans using small satellite radar.

The Catalyst funding follows the more dubious NZ Government announcement of its first official space mission as a country with MethaneSAT.

The government has contributed $26 million to the $88 million US-based Environmental Defense Fund project, launching a 350kg satellite designed to detect global methane emissions. Scheduled for launch in 2022, New Zealand will provide a mission control centre for the satellite. The satellite won’t however launch from New Zealand – at 350kg, it’s too big for Rocket Lab.

“New Zealand is home to a great deal of research and development activity and capacity, both in our universities and private companies,” James says. “[The Deloitte] report substantiates this and indicates that commercial exploitation of space is an area of potential growth.