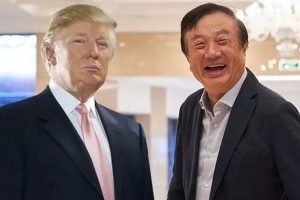 But who would buy?…

Huawei boss Ren Zhengfei has called Donald Trump’s bluff, announcing he’s willing to consider a sale of the company’s 5G patents – but he admits he has ‘no idea’ who might take up the offer.

In interviews with The New York Times and The Economist, Zhengfei has said Huawei is prepared to license its 5G technologies and techniques – including existing 5G patents, licenses, code, technical blueprints and production nouse –  to US companies so the country, which has no local 5G networking manufacturers, can build its own 5G industry.

The sale would help create a US rival to compete in the 5G networking market and create a ‘balanced’ situation.

That, Ren says would help create a US rival to compete in the 5G networking market and create a ‘balanced’ situation between China, the US and Europe – home to major 5G suppliers Finland’s Nokia and Sweden’s Ericsson. South Korea’s Samsung and China’s ZTE are other key 5G equipment alternatives.

Ren’s offer is clearly an attempt to placate the US, and call Trump’s bluff: Earlier this year he urged US companies to ‘step up’ and compete with Huawei in the 5G arena – despite the distinct lack of US challengers.

Ren says the purchaser could modify the source code, ensuring neither Huawei or the Chinese government have any control over the new systems, and would be able to sell the 5G equipment anywhere other than China.

It’s one possible option for the company to potentially allay some of the ‘security’ concerns swirling around its 5G.

Both the United States and Australia have banned Huawei from their 5G builds. With the UK still deciding whether or not to allow Huawei to participate.

In New Zealand a proposal by telco Spark to use Huawei for its 5G build was knocked back by the Government Communications Security Bureau with Director General Andrew Hampton citing ‘a significant network security risk’ having been identified.

There’s a catch however – for Huawei to share, Ren told The New York Times ‘the US side has to accept us at some level’, and that could be a big ask given Trump has had Huawei in the crosshairs throughout the China-US storm.

US companies Nokia and Ericsson are unlikely to be interested according to Professor Steve Tsang, from University College London’s Soas China Institute.

Cisco already competes with Huawei across the enterprise and service provider networking market, and has developed 5G related technologies (as have companies including Hewlett Packard Enterprise and Dell EMC telco infrastructure). But Cisco’s play is in switches and routers tucked away in telco’s networks, not the wireless infrastructure enabling cellsites to connect with smartphones and other devices.

The US giants of the telco network equipment scene – Lucent (which helped introduce the CDMA technology protocols used in 2G and 3G) and Motorola are giants no more.

Names like Arista and Juniper (which has reported declining fortunes in recent times with 2018 revenues down eight percent year on year to US$4.6 billion) have also been floated as potential buyers.

The figure, however, could be a stumbling block: While Ren didn’t offer up what Huawei might think a fair price for the technology, which it has invested significantly in, The Economist suggests it could run to tens of billions of dollars.

“It’s also difficult to see how an American company would be able to reassure the Trump administration that it’s absolutely top notch American technology,” Tsang says. “And if they can’t do that, why would they want to spend tens of billions of US dollars on something that will quickly become out of date.”

Despite the US friction, figures from Dell’Oro Group show Huawei’s telecoms equipment market share grew in the first half of 2019, up from 27.7 percent to 28.1 percent – with Q2 figures sitting at 29 percent.

Dell’Oro also notes that the overall telecom equipment market shifted back into growth phase after three years of decline, recording a six percent increase in the past 12 months.

“Although Huawei was placed on the US Entity List in late May, restricting its purchase of US components without a license, the company seems to have avoided any negative impact on sales of telecom equipment,” Dell’Oro says.  “For the trailing four-quarter period (Q3 2018 through Q2 2019) Huawei held the highest share of the telecom equipment market at 28 percent.”

Nokia takes second spot, but well behind Huawei, with just over 15 percent share.