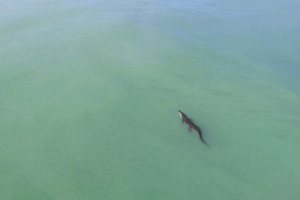 We’ve got drones for surf lifesaving, shark and traffic congestion monitoring and even drones going underground in mining and underwater to deliver coral babies on the Great Barrier reef. And the latest? Croc-spotting.

Australia’s The Ripper Group, which has also been behind some of the surf lifesaving and shark spotting drone offerings, is deploying the same artificial intelligence drone technology used for its shark detection drones to spot crocodiles in Queensland.

CrocSpotter Ai was designed in collaboration with the University of Technology Sydney and AWS and combines drone technology, artificial intelligence and cloud computing.

The algorithm has a 93 percent accuracy of identification

The system was later adapted to include a shark-spotting algorithm. That’s now been further adapted, using deep neural networks, to detect crocodiles via a smart camera. CrocSpotter Ai using AWS cloud has reduced latency of video feeds from the drones from 10 seconds to one second, to create the world’s lowest latency high definition video stream running AI analytics via a drone.

Surf Life Saving Queensland, with funding support from the Queensland Government, approached Westpac Little Ripper to develop the CrocSpotter following a series of incidents and increased crocodile sightings in 2017/2018 in North Queensland.

The Westpac Little Ripper drones carry the Ai Spotter as part of the drone’s payload with the on-board video. As the video streams live from the Westpac Little Ripper drone to the pilot on the ground, the algorithm operates by ‘washing’ the video and alerts the pilot to a possible threat. The threat is immediately highlighted by a flashing red box around the animal, and draws the pilot’s eyes directly to that part of the iPad he uses to fly the drone.

The Ripper Group says the algorithm has a 93 percent accuracy of identification, versus just 16-19 percent for the naked eye.

“The technology enables crocodiles to be detected in complex environments including murky and muddy waters in both wetlands and the open ocean,” says Nabin Sharrma, University of Technology Sydney researcher in the faculty of engineering and IT.

“This is the first time that this sort of animal detection drone technology has been deployed via a high-quality video stream at ultra-low latency with the Ai producing a greater than 90 percent accuracy to detect crocodiles.”

The drones, which are expected to be deployed in North Queensland this summer to better protect swimmers, highlight the growing use of drone technology globally.

Goldman Sachs has forecast a US$100 billion market opportunity for drones, helped by growing demand from the commercial and civil government sectors.

Even the New Zealand government is getting carried away with the hype, with a Ministry of Transport report claiming drones could be worth $7.9 billion over the next 25 years.

While the technology got its start in the military – like the internet and GPS before them – they’ve rapidly evolved to take on both the business and consumer markets.

The burgeoning drone market has also seen the growth of another market with demand increasing for anti-drone (or counter-unmanned aerial vehicle) devices capable of locating, tracking, identifying and ‘neutralising’ ‘rogue’ drones.

Research and Markets has forecast that market to grow at a ‘significant’ compound annual growth rate of 16.8 percent between 2019 and 2024 – although from what base wasn’t apparent.

Research and Markets says incidents with drones at airports, such as last month’s brief shutdown of Dubai International Airport because of suspected drone activity, Gatwick’s similar 36 hour shutdown in late 2018 and the September drone attack on the Saudi Aramco oil processing facilities in Saudi Arabia, are increasing demand for installing counter-UAS solutions around critical infrastructure.

Locally, drones breaching the 5.5 kilometre exclusion zones around Australian airports are electronically scanned for serial numbers, with owners able to be tracked down within minutes or their crafts disabled.