News > Security in spotlight as industry honoured in iSanz awards

Security in spotlight as industry honoured in iSanz awards 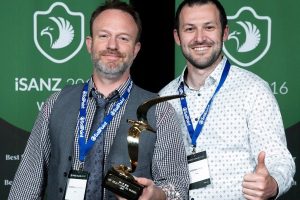 From a Kiwi AI focused security startup taking on the world, to a project to reduce the USB risk and an ‘innovative’ phishing campaign, New Zealand’s top security projects and teams were on show last night at the iSanz Awards.

The fifth annual Information Security Awards saw five awards presented at a gala event in Wellington, where Dr Ian Graham – founder of computer network monitoring company Endace and Emeretius Professor of the University of Waikato, was also presented with a Hall of Fame award.

Endace commercialised research begun at the University of Waikato’s Computer Science Department in the mid-90s.

Darkscope, which bills itself as ‘the first joint human and artificial intelligence business’ dedicated to developing, training and using AI to provide advanced cyber security, was one of the big winners on the night, beating out Cyber Prep Academy and Mindshift to take out Best Start-up or New Business award.

Rather than assessing a company’s capability to protect against cyber risks, Darkscope’s AI engages in the deepweb and darknet to find stolen data, bogus sites and preparation for an attack, scam or phishing assault.

It’s proved a winning formula for the company, which was established in May 2018 and has rapidly expanded into Australia, the UK and Germany, with plans to launch into North America and Asia over the next three years.

An 80 percent increase in the number of staff across 40 regions reporting suspicious emails.

Kendra Ross, iSanz board chair, says the awards are an opportunity to inspire, promote and reflect on the hard work that goes on behind the scenes in the information and cyber security sector.

This year’s winners faced stiff competition, with Ross noting the awards saw a 25 percent increase in entries across all categories, something she says is indicative of a growing sector.

“It’s encouraging to see the work being done in New Zealand to help protect computer networks, our people and our country from malicious activity,” Ross says.

HealthAlliance walked away with the Best Security Project/Initiative award for a project to reduce risks from unencrypted USB devices across four Northern Region district health boards. That project saw more than 8,000 secure USBs deployed across the region and 97 percent of PCs across the DHBs secured to accept only secure USBs.

Other finalists in the category were Aura Information Security for its partnership with the Institute of Directors and Gallagher for its Security Health Check.

An internal cyber security campaign by NZME, which used humour, video, posters and a reporting button shaped as a fish and hook to raise awareness of phishing, took top honours in the Best Security Awareness Campaign. The initiative saw an 80 percent increase in the number of staff across 40 regions reporting suspicious emails.

Paymark, with PCI DSS awareness campaign, and healthAlliance with a ‘cyber heroes’ campaign, were also finalists in the category.

Auckland-based cyber security company Defend, which has more than 30 staff across Auckland, Wellington and the Midlands and provides holistic information security services to organisations and government departments, was named best security company.

Ian White from ZX Security took out the night’s individual award: Up and Coming Cyber Security Star. Christine Dewes from Quantum Security and Chris Hislop from BNZ bank were also finalists in the category.

“We’ve again been highly impressed by the accomplishments of all our entrants, finalists and winners,” Ross says. “They are leaders in the information security field and number among some of the most skilled professionals anywhere.”