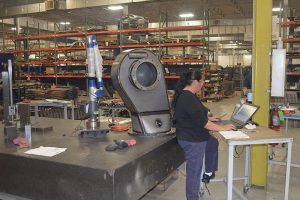 Shoptech, which specialises in providing comprehensive ERP systems for small to mid-sized manufacturing companies, has set its sights on the New Zealand and Australian markets, and aiding local companies with their move to Industry 4.0.

Greg Tracey, Shoptech director of global channel sales, says the expansion follows the launch of a software-as-a-service version of its E2 Shop System which provides a full ERP system, from estimating and quoting to inventory and purchasing, scheduling, data collection, quality, job costing and tracking, shipping and complete accounting.

The fourth industrial revolution is the wave of the future and the biggest trend in manufacturing.

“What is different about us is that we are specific to manufacturing and try to stay in the SME market as well,” Tracey says.

“And what differentiates us is that we are fully web-based – hosted on Google Cloud and with iOS and Android apps – and in our market there is really no one else that does that unless you go up to the Epicors and those bigger companies, who focus on larger businesses.”

The web-based focus is increasingly important in manufacturing, Tracey says. Many of the companies Shoptech supplies are family-owned businesses with a new, younger generation coming into the business and wanting the same flexibility and ease of use they’re used to with personal technology.

“Younger people want the web-based tech, they want the mobility to be able to work from anywhere, the apps on their phone to be able to pull up data in real time at any time.

“People who are looking for that and don’t want to have to install expensive infrastructure with servers and what not are really drawn toward a company like us,” he says.

“We have always had the functionality international markets such as Australia and New Zealand require, now we have the technology to go along with it.”

Shoptech has more than 9,500 customers – predominantly engineering, machining and metal fabricating shops – across the US and Canada and, after a soft launch in Australia and New Zealand late last year, has already secured around 20 customers locally.

The company targets businesses with less than 100 employees, though it does have some with several hundred.

Tracey says the average customer is ‘quite a bit smaller’ with a sweet spot of 20 to 50 employees.

Industry 4.0 – the blending of physical and digital and the growing trend towards automation and data exchange within manufacturing – is also pushing manufacturers in new directions and requiring web-based products that can integrate with other systems, opening the doors further for the E2 Shop System, Tracey notes.

“Everyone is talking about the whole fourth industrial revolution. I don’t know how much it’s taking hold yet in reality, but it is the wave of the future and it is the biggest trend in manufacturing and that’s where we’re so excited – the more that catches on the more people will want to be going to a web-based product that can integrate with other systems.”

Deloitte has noted that Industry 4.0 is changing the role of ERP systems in companies.

The consulting firm says the focus will shift from central data collection to the support of mobile, role-based user interactions.

“Thanks to real-time data access and intelligent data analyses, the efficiency and transparency of process execution can be increased significantly,” Deloitte says in Industry 4.0: Is your ERP system ready for the Digital Era?

The increasing focus on quality certifications, such as ISO, is also playing to the E2 Shop System, which enables manufacturers to manage their certifications within the system.

Shoptech has signed manufacturing and distribution business management solution specialist WMSSoft as an A/NZ partner, handling sales and on-boarding. Tracey says Shoptech is also available to help on-board clients, however he notes many customers chose to implement the system themselves, given how intuitive it is.

“And we also have a lot of free web resources available, including hundreds of videos, help papers and articles, as well as a full customer community where customers can interact and get advice.”