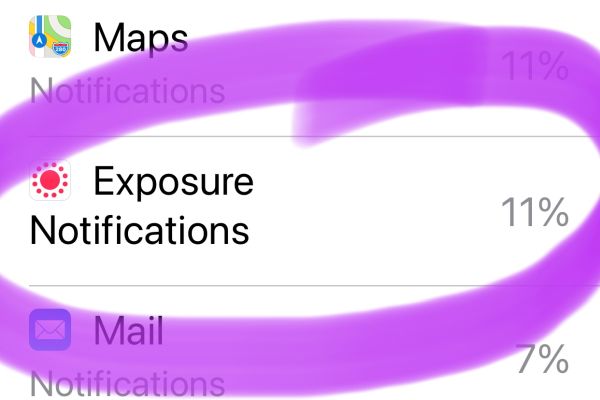 Bluetooth battery woes and the future of Covid Tracer…

As New Zealand steps down from yet another Covid community scare, so too are the number of NZ Covid Tracer app users with Bluetooth deployed.

Data from the Ministry of Health shows 1,132,751 CovidTracer users had Bluetooth active yesterday – Thursday 18 February (with the app itself having 2,649,721 registered users). That’s nearly 20,000 less than the day before when Bluetooth use reached record highs at 1,151,190.

“The root cause is not ENF.”

For the Ministry it’s an ongoing issue with numbers of scans of QR codes also following a pattern of spiking during outbreaks, only to rapidly drift downward, prompting a continuous stream of reminders from director general of health Ashley Bloomfield to keep scanning, and to turn on Bluetooth.

Why both? The Ministry of Health, which has been using media releases and messaging from Bloomfield as well as its Make Summer Unstoppable campaign and the Ministry’s social media channels to get the message out, told iStart: “Scanning QR codes allow us to create a private record of the places we’ve been, while Bluetooth creates an anonymised record of the people we’ve been near. Both are important for contact tracing.

“When a person regularly scans in and enables Bluetooth, it enables contact tracers to quickly identify locations of interest so we can get the message out, and isolate and test people who may have come into contact with the virus, before it has had a chance to spread.

Battery usage is right up there with data privacy concerns when it comes to Bluetooth and Covid Tracer.

“In theory, it shouldn’t use any more battery than having Bluetooth on by itself normally, but in practice it does seem to drain a bit more,” Chen says.

The Ministry of Health, meanwhile, says battery drain should be minimal, but users might notice an increase if they haven’t previously had Bluetooth and location services turned on.

“On a typical iOS device, our tests have shown ENF has consumed three percent battery in 24 hours and that’s when a device is scanning for keys for four seconds every five minutes,” Vyas says. (For the record, Rush also currently estimates data usage as under three megabytes per year.)

However, he acknowledges there have been issues with battery drain, not just with Bluetooth but with the wider Covid Tracer app. That, he says, comes down to the complex interplay of technologies at work.

“If you look at the people who are experiencing battery related issues we’ve been able to identify some of those issues down to types of devices, types of OS, etc. And we’ve found optimisations we can do on our software which fixes those problems as time goes on.”

Android devices in particular have proven problematic, with their wide variance in devices, operating systems and manufacturers.

“The people who have been complaining – quite rightly – [about perceived Bluetooth battery draining] are probably in the other camp where we’ve found other issues which we are starting to fix and address,” Vyas says. “The root cause is not ENF.”

His advice to anyone believing Bluetooth is affecting their battery life is to contact the Ministry of Health (you can email Covid Tracer app issues, queries or feedback to help@covidtracer.min.health.nz).

“There are a number of people on Ministry side and our side who are constantly going through customer tickets and customer issues and complaints and suggestions,” Vyas says. “All that feedback absolutely gets looked at and prioritised. And we’re thankful that kiwis are actually broadly in support of the government test and trace program and quite happy to field feedback as well if people have it.”

Chen says he’d encourage people to try Bluetooth for a few days to test whether or not it does cause battery drain, to an extent that it means their phone isn’t usable, rather than assuming there is battery drain.

“You can also mitigate battery drain by only turning on Bluetooth when you’re out and about, and leaving it off when you’re somewhere where you know all the people near you, like at home or at work.”

As to the other elephant in the room, data privacy, Vyas is adamant big brother isn’t watching.

“Hand on my heart, the data model is decentralised so all your QR code data and Bluetooth data stays completely on your phone even if you are a positive case or a close contact of a positive case.”

Users have to manually input a code to upload QR scan data for contact tracers, if needed. In the case of Bluetooth data, any notifications are sent via the Google-Apple framework, not local contact tracers.

And if you’re wondering about those daily reports of how many scans are made – surely if they know that they are receiving info about what we’re up to? – Vyas says all that is received as anonymised aggregated data on scan count.

“It’s kind of like a page count on a web site.”

So just how good is Bluetooth tracing?

A Turing Institute report in the UK says Bluetooth has been significant in isolating 1.7 million people who might have been in close contact with infected people.

Here in New Zealand, the Ministry of Health says two people received a Bluetooth alert following the community cases in January and contacted Healthline. It’s not possible to see the number of contacts a phone records via Bluetooth due to the privacy preserving design of the app.

“That’s reassuring that the system is working at a technical level,” Chen says of the Northland contacts established via Bluetooth, “but now we need to get a high proportion of people using it to have confidence that a sufficient percentage of close contacts are picked up.”

He says based on his calculations he believes at least 60 percent of eligible adults – that is, adults with smartphones – need to be participating for public health officials to have confidence that the system has good coverage.

“So the target I’ve set is two million devices.”

Vyas declines to offer any figures, but says there is a design challenge, and probably a policy challenge, to be solved in how to get scanning rates to remain high, rather than the spikes – and then rapid declines – with each community case.

He has reservations on making QR scanning mandatory, however.

“If organisations were asked to make sure that every single visitor on their premises scans their barcode it will actually drive adoption rate and therefore help contact tracing.

The con of that is it is very hard to enforce and for certain types of businesses and locations it will actually increase their overheads of complying massively and to the detriment of their customer experience.

It’s a fine balance. I’d like to think it is a habit thing. In the early years, you sometimes forgot to scan but in time it becomes habitual.”

He’s urging companies to think carefully about where they put QR codes, rather than simply having them at the door.

“Think about where on your premises people pull out their phone and put them there.”

He’s also keen to see more discussion around the role apps like Covid Tracer will play moving ahead, particularly as people become vaccinated and travel opens up again.

“I’m not saying that’s in the road map by any means, it’s something the MoH dictates, but I would love to drive a conversation which is to what extent do these digital tools allow for people to move around safely, not just in New Zealand but outside. That’s a really important question to consider.”