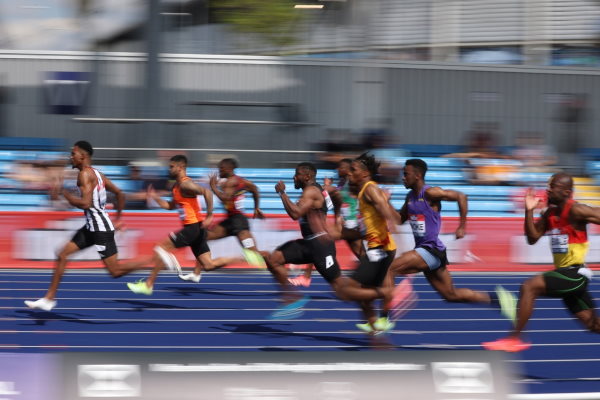 Games showcase for it all…

The Tokyo 2020 Olympics opened with a high-tech flourish, with the spectacular drone display in the opening ceremony.

While the games might be light on spectators – at least at the stadiums – they’re certainly not light on technology, from 3D athlete tracking, biometrics and sensors to reduce the risk of heatstroke to Olympic robots, not to mention the 360-degree 4K camera coverage, jazzy laser graphics and virtual fans.

The cloud behind the scenes
The Olympic Broadcasting Service will produce around 9,500 hours of content during the two-weeks of the Tokyo Games and cloud will be key to providing the scalability required to archive, manage and stream all that content. Enter the OBS Cloud, a partnership with Alibaba, which transfers many of the operations broadcasters usually require hardware for to the cloud.

3D Athlete Tracking is taking speed analysis to the next level with real time insights and overlay visualisations.

“That will make their operations far more productive, less costly and will mean they need less people on the ground. It is a major innovation.

“Broadcast data-heavy production workflows are probably the holy grail of cloud technology and the Olympic Games, because of its sheer size and complexity is a unique opportunity to introduce it into our operations,” OBS says.

“We believe that this can really be a driver of change to make broadcast operations far more agile, flexible and efficient.”

Virtualisation technologies are also being used to keep programming on air while dealing with the behind-the-scenes disruption of Covid, in a move the OBS says is likely to continue into other games, growing further.

Alibaba’s cloud technology is also being used to help Games staff reduce the risk of heatstroke. An intelligent ear-worn device tracks body temp and heart rates of the staff with a cloud system identifying the risk in real time for individual staff and alerting them of the risk and recommending precautionary measures, such as drinking more water.

Virtual fans, real engagement
With the cavernous stadiums nearly empty, thanks to Covid, technology is being harnessed to attempt to bring some of the roar of the crowd back to Tokyo – and to take the Games to people’s living rooms more than ever before.

The Tokyo Olympics official website includes a ‘Cheer Zone’ which allows fans to interact with selected live events. The virtual tools – a ‘cheer’ or a short selfie video clip of you cheering your favourite athlete or team on – bring an element of competition to the fan arena, with regions shining brighter the more people cheer. Selected uploads are also being collated into video fan walls shared at venues and with broadcasters.

Even the cameras are stepping up a notch with multi-camera replay systems, relying on a myriad of high-speed 4K cameras to provide the ability to move around the action at any given point in time and watch it from a variety of angles, in near real time. Remember that scene from The Matrix where Neo dodges bullets while cameras pan around him? At some Olympic venues between 60 and 80 4K cameras will help create a similar effect – camera operators will be able to choose where to freeze the motion and manipulate the replay from side to side around the athlete as well as zooming in. Since the system simply stitches together these feeds and doesn’t have to virtually create filler frames, no rendering is required, allowing the clips to be ready in under five seconds.

Swiss watchmaker Omega is responsible for all the timing, scoring and ‘venue results systems and services’ at this year’s Olympics – for its 29th year.

They’ve introduced new motion sensors attached to all athlete’s shirts – and capturing around 2,000 sets of data a second – and positioning systems to the lineup this year, capturing information such as the height of a beach volleyball player’s jump, or a sprinters form on the finish line.

Take beach volleyball. AI recognises the different shots and passes made, along with the flight path, and uses that data combined with information from gyroscope sensors in players’ clothing, which let the system know movement directions along with the data such as speeds and height of jumps.

Similar analysing technology has been introduced for cycling road races and gymnastics.

In taekwondo sensors in athletes sock, in use since 2012, measure acceleration and impact of the kicks.

In the swimming, special cameras are breaking down the stroke count and acceleration of swimmers using AI, providing viewers with the speed of the swimmers in metres per second in real time.

3D Athlete Tracking technology developed in collaboration with Intel and Alibaba is also being used to ‘offer viewers a new way to experience the action’ of sprint events including the 100m, 200m, 400m and decathlon, ‘taking speed analysis to the next level’ with real time insights and overlay visualisations. The data includes showing the moment when each sprinter reaches their top speed, and colour-coded visualisations of runner’s changing speeds.

Ultrahigh definition 5K cameras are capturing basketball games in all three dimensions. Cameras used in the archery competitions include the ability to determine heart rates from changes in skin tone.

Robot and self-driving vehicles
Service robots are also being harnessed at the Olympics for a range of tasks including removing rubbish and vacuuming and helping athletes with luggage. Security robots are also in operation at Narita Airport as part of the Tokyo 2020 Robot Project to ‘promote robots for social good’.

Human support robots are also assisting wheelchair bound spectators by carrying their belongs and guiding them to their seats, while mascot robots Miraitowa and Someity are on welcoming duty. Self-navigating robots are also hitting the field, retrieving items such as javelins and hammers in throwing events.

Meanwhile there are nearly 100 self-driving vehicles plying the Olympic Village, along with 100 hydrogen fuel-cell buses.

The focus might be on the athletes, but technology is adding new levels of insight and enjoyment for spectators everywhere.