Dimension Data’s top IT trends in 2018 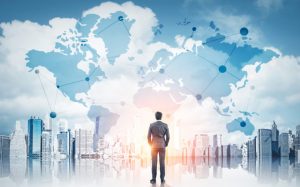 Artificial intelligence, machine learning, robotics, and virtual and augmented reality aren’t new concepts. However, until now we’ve been talking about it somewhat in isolation. Increasingly we’re seeing how these technologies collectively have the potential to deliver disruptive outcomes.

Let’s look at some examples: logistics giant, DHL, is successfully using machine learning, artificial intelligence, and augmented reality in its warehouse picking operations through the use of smart glasses.

The glasses place a display in front of the wearer’s eye, which provides a visual display of order picking instructions, the exact location of the goods in the warehouse, and where they should be placed on the cart. This has resulted in massive improvements in employee productivity and in accuracy of deliveries.

Use cases for augmented reality are moving into the consumer space. Air New Zealand is currently trialling a solution to improve how they serve their passengers.

As flight attendants walk down the aisle wearing augmented reality glasses, they immediately know each passenger’s details – how many miles they’ve flown, what their meal preferences are, and where their final destination is – all of which enhance their ability to provide a more personalised service.

Roaming robots
The true promise of robotics is starting to manifest. In the US, San Jose’s Orchard Supply Hardware is using machine learning with robots connected to their inventory systems.

When you enter the store, you can walk up to the robot and communicate with it in normal language. The robot knows exactly where the items that you’re looking for are located and will escort you to the relevant aisle. It’s also 100% up to date with what goods the store currently has in stock.

Trend 2: Lack of programmability is hindering businesses’ ability to deliver on the potential of hybrid IT

We believe that organisations haven’t made as much progress as they’d like to in optimising their hybrid IT environments, partly due to limitations in their ability to leverage programmable technology.

In 2018, both applications and infrastructure will continue to become more programmable, but the pace needs to pick up. Why? Programmability delivers business benefits, such as reducing cost and human error that are too compelling to ignore.

We anticipate that infrastructure vendors that haven’t made their wares sufficiently programmable are going to see their market share being significantly eroded in 2018.

The traditional outsource managed services model is gone. Today, organisations expect an automated service managed from the cloud in a hybrid IT environment.

Companies don’t want to worry about whether technology resides on their existing on-premise equipment, on a provider’s cloud, or on a hyperscale cloud, or all of the above. They just want to consume it the way they want to, in a fully automated way.

Find out how we’ve helped Woolworths, and First Choice Global to optimise their hybrid IT environments.

Trend 3: Decentralised transaction models are breathing new life into cybersecurity and the Internet of Things (IoT)

Over the last year, blockchain has gone from strength to strength. In the financial services sector, we saw both the US and European capital markets moving onto Blockchain platforms in a large way, with similar activity in more conservative markets like Japan. Considering how conservative and compliance-focused this sector is, that’s quite remarkable.

Many people found it quite ironic that the cybercriminals that perpetrated the recent WannaCry ransomware attack could hold a federal government to ransom and demand to be paid in Bitcoin.

Bitcoin might be a crypto-currency, but as it’s based on blockchain, it’s an interesting use case. The fact that the cybercriminals ─ who invest a lot more in cybercrime than most companies do in cyberprotection ─ are confident that bitcoin provides a safe mechanism (i.e. its blockchain foundation) for the payment of ransoms, should give us an idea of just how secure the distributed ledger approach is.

We believe that blockchain has the potential to totally re-engineer cybersecurity, but that the industry has yet come to terms with it.

With a distributed ledger, cybercriminals don’t have a central database to attack. With an encrypted ledger distributed across numerous computers, all validating one another, where’s the perimeter? It’s an inherently more secure architecture.

In the world of IoT you’re generating millions of small transactions collected from a distributed set of sensors.

We also expect to see interesting applications of Blockchain and IoT in the area of cybersecurity in the year ahead.

Trend 4: Surge in interest in software-defined wide area networks (WANs) while wireless is set to boom

In 2018, we expect to see recently released software-defined WAN technology gaining significant adoption. Some 40 percent of businesses across the globe will start to deploy software-defined wide area networks – up from just 2 percent in 2016.

This technology allows you to automate decisions, establish more granular sensitivity to the application and determine how best traffic should be handled. It can even adjust virtual architectures to match workloads or conditions in real-time.

The technology also allows for more informed decision-making about how to use either broad-based Internet or your own costlier, but more robust, traditional MPLS-based networks, thereby enabling a better cost/performance balance.

Wireless wins
In 2018, we can also look forward to a boom in new wireless technologies enabling IoT, which brings us a step closer to the dream of pervasive connectivity. Some of these advancements will include 5G and Gbps Wi-Fi, new controls, virtual beacon technology, and low-power, long-distance radio frequency.

Wireless is rapidly becoming pervasive in the enterprise, and even in larger spaces, such as campuses and shopping areas. More intelligent Wi-Fi providing application hooks simplifies the collection of rich control and metadata that drive applications and analytics, and impacts business processes.

We’ll start seeing more wireless-enabled processes. This technology can truly link the user to the application, and to the business process, leading to optimisation and new business model opportunities.

We also believe that networks, particularly on the edge, will become more intelligent especially when analytics becomes a stronger focus.

Trend 5: Only organisations with the correct architectures and data structures will achieve digital supremacy

To achieve digital supremacy, organisations need to ensure that their basic architectures and data structures are in place.

Most will need a partner to help them get the basics right. Systems integration skills are key for incumbents hoping to compete effectively against new market entrants. A systems integrator can help you determine how to extract value from your legacy environment.

We also expect to see businesses increasingly seeking out a new genre of consulting and advisory services. In the past, businesses would look for advice on how to improve specific technology towers.

Today the conversations are quite different. Organisations are saying: ‘I want to move to digital, but how do I get there from here, quickly? Be very precise ─ I want to know what I should do this week, not what I should do in two years’ time. Which of all these moving parts should I look at first ─ operating profit improvements, cash flow, client experience, or my supply chain?’

The digital fight-back against disruptors
We’re seeing increasing numbers of cloud-born start-ups starting to be disrupted in certain industries.

We believe that established organisations that have proactively transformed into digital businesses, modernised their architectures, and embedded high levels of automation into their operations have a window of opportunity in the year ahead to claw back market share.