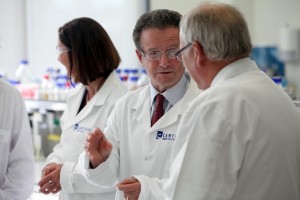 Cawthron Institute has joined REANNZ, which offers an advanced network and high speed internet for research, education and innovation entities in New Zealand.

Based in Nelson, Cawthron Institute is New Zealand’s largest independent science organisation, specialising in food and water research for the primary production sector. Its scientists are involved in research all over New Zealand and around the world.

The new REANNZ network connection at Cawthron Institute will allow researchers to run models on supercomputers more efficiently, to predict the weather or understand climate change.  They will also be able to send data and collaborate more easily with their colleagues around the world.

The network was connected in early June, and Cawthron Institute scientist Andrew Fidler has already noticed a difference. As part of an international research project investigating how bar-tailed godwits ‘know’ when to migrate, Fidler collaborated with colleagues in Rio de Janeiro, Brazil. The combined genetic and behavioural research project requires Fidler to transfer DNA sequence files of more than 200GB. Previously, it took up to several days to arrive – that’s down to minutes on the REANNZ connection.

“The network has made a significant difference to all the research at the Cawthron Institute that involves large data-sets. It’s like going from dial-up to ultrafast broadband,” Fidler said.

Until recently, Cawthron Institute’s molecular biologists, working with scientists at New Zealand Genomics Limited in Auckland and Massey, had to send large data sets by courier on a USB memory stick. “When you’re excited to see your data it’s frustrating to have to wait a few extra days for it to arrive. Now we can get it within a few hours of it been generated,” said Susie Wood, Cawthron Institute scientist.

“That’s not only much better for us as researchers, it’s also good for our clients who are funding this research as it saves time, and money,” she added.

REANNZ CEO Steve Cotter said a high-speed network improves collaboration and innovation, “Ensuring we, as New Zealand, have a place on the global stage.”

REANNZ and the 100+ research and education networks worldwide are engineered differently from commercial networks.  They are optimised for performance, not profitability. REANNZ connects most members at 10 gigabits per second – or about 1,000 times the speed of an average DSL connection.

Cawthron Institute CEO professor Charles Eason (pictured) said the ability to send big data fast is crucial. “We’re an information organisation in an information era, and faster connectivity to the world outside of Cawthron is a fundamental part of our operations and digital strategy.”