Jet Reports has ScooterBug firing on all cylinders 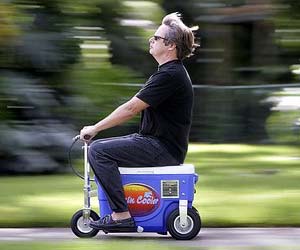 Botched reports used to be a huge headache for this mobility product provider. Now its report generation is in overdrive…

Vivian Pilot, director of finance and administration at ScooterBug, Inc., had a problem. Reports flooded her office – which was fine, except that she spent thousands of dollars fixing each report. “That’s the way reporting is,” Vivian was told.

When something other than a botched report crossed her desk, Pilot was thrilled: “Reporting in Excel for all Great Plains modules,” she read on a flyer. Could this be? Could she actually receive the reports she needed without modifications and without extra work? It sounded too good to be true.

No room for errors
Pilot was struggling to get reports done right. “It’s critical to get the job costs right,” she explains. “We had better know the staff hours each job will take to form the estimate for new jobs we do.”

She and her team needed to know the costs of each job, and then they had to map those costs to the types of jobs and the season to better predict cash flow through the year.

“I had to add the new customers to the tree, column and row for the report. I had to open them up separately. It was very complex.”

“We found it difficult to describe the report, and we ended up with a report that didn’t work well for us. We’d find, at month-end, the financials didn’t match with our contribution margin report. It turned out the report was not able to automatically update when we added new customers to our system.”

A call for help
With rising job demands and a weak link in reporting, it’s no wonder Pilot felt so relieved when that flyer crossed her desk. She was stuck with reports that didn’t work together and didn’t meet her needs.

“I’m at the mercy of these reports. That’s very frustrating when you’re running a business,” she says. Her demands were maddingly simple: “I want reports. I don’t want to get trained. I’d forget the complexity of the reporting tool anyway.”

Pilot picked up the phone and called the number on the flyer.

“The Analytics Company team understood my problems immediately,” Pilot says. “They understood what I was trying to do.”

A Jet report for job costs came first. “The report takes every contract we have and lists out each element: installation; site survey; planning and production and tasks to be completed to finish the job; cost estimates; and actual estimates to check against budge,” Pilot says. Finally, a report that was easy to work with, error-free and simply made sense.

“I can use Jet Reports to pull information from my Access database and Great Plains modules,” she adds. “I can get so much more out of my databases now!”

Jet Reports delivers results
“I’m impressed with Jet Reports. There is so much functionality in a simple command,” Pilot says. “As soon as we bought Jet Reports, we started asking ourselves ‘What else can we do with Jet Reports?’”

“We now have the reports. They’re done and we love them. We are going to move all our reports to Jet Reports.”

By purchasing Jet Reports, Pilot saved $4,000 immediately by getting the two reports she needed – packaged in the purchase of Jet Reports – quickly. She also saved herself hours per month in meaningless report rework.

And Pilot is just getting started. Each report used to take from 30 hours to 60 hours to build. With Jet Reports, she gets those reports for less than $800 each. Over the next few months, her savings will multiply to $20,000 or more.