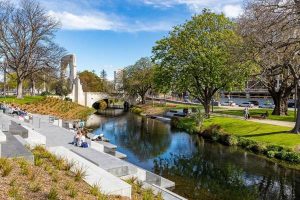 ChristchurchNZ is the council agency that provides the vision and leadership to attract events, visitors, businesses, talent, students, investors and entrepreneurs to the city. It provides targeted initiatives to support innovation and business growth while also promoting the city nationally and internationally. Its goal is to grow the city’s reputation as a vibrant and exciting place where people experiment and test new ideas, and innovate in business, technology, and society.

Martin Brice, Business Systems Manager, ChristchurchNZ, said, “It was important to have a cloud-based solution for disaster recovery purposes. Since suffering a devastating earthquake in 2011, it was clear that business systems should be based in the cloud rather than on premises to avoid business continuity issues in the event of another major earthquake.”

Reliable solution with local support needed
Newly-formed from the amalgamation of two council-controlled organisations in 2017, the agency needed a core business system that would meet the complex needs of the new organisation.

ChristchurchNZ needed to automate its processes and put support for its financial management system on a better footing. Initially, the business had chosen a cloud-based solution that was supported by an Australian-based provider. Over time, that support proved inadequate and it became clear that it needed to work with a local provider who could guarantee improved uptime for the solution as well as work as a partner to help the business improve its financial analysis and accounting.

Cloud-based solution required for business continuity
With a clear, simple goal in mind, ChristchurchNZ engaged Intergen to help it determine the right solution for the business moving forward. The project was finance-led instead of technology-led, which meant Intergen was working directly with the solution’s end users from the start.

Intergen recommended Microsoft Dynamics 365 Business Central, which is Microsoft’s first cloud-based financials solution aimed at small and medium businesses, and based on the popular Navision solution.

As it turned out, ChristchurchNZ was the first organisation in New Zealand to implement Business Central.

Being a recently refreshed built-for cloud solution also meant that Business Central would be relatively easy to implement. Deployment is based on a wizard-like process with very little development required. Intergen added significant value in its business consulting with advice around the functionality within Business Central that the business needed to deploy.

Martin Brice said, “Intergen had a small window for the implementation and the entire project was completed within three or four weeks. ChristchurchNZ was live in the new system at the beginning of October, which was good timing for us.

“The process was very straightforward and used the same architecture as our previous system, so it was a matter of extracting the data from the old system and loading it into Business Central. The hardest part was checking that the data was correct.”

“The system is more user-friendly and reliable now, as well as more flexible.”

Business Central is different to previous Microsoft financial solutions such as Dynamics NAV because its core remains stable and unchanged by customisations. To build enhancements, partners such as Intergen create them locally and layer them on top of the core architecture. This means they’re unaffected by upgrades, which are rolled out automatically by Microsoft.

Using this new approach, Intergen was able to create and deploy extensions in two days, proving that the implementation of even a very complex solution wouldn’t need to be lengthy or painful. Using the team’s extensive experience in financial management and accounting, Intergen was able to recommend improvements and different processes that would help streamline ChristchurchNZ’s operations without requiring bulky, burdensome customisations.

Control through automation
The agency has seen significant growth since it was set up, and the business operates with more complexity than before. The project-based nature of the work is well supported by Business Central.

Martin Brice said, “As the business has grown, it has been essential to gain more control over its finances. Previously, the business was small enough that every finance person knew where every dollar was. But now ChristchurchNZ is at a stage where the activity is too big for one person to manage so having controls in place is essential.”

Those controls have been achieved via automation of the purchase order creation and authorisation process, with further automation projects scheduled for the new year.

Future plans
ChristchurchNZ intends to investigate optical character recognition (OCR) capabilities to help with further automation of key processes. Furthermore, the business will likely look to integrate Business Central with its Microsoft Dynamics CRM solution to have a common platform, which will enable seamless integration in the future.

Working with Intergen
Martin Brice said, “The system is more user-friendly and reliable now, as well as more flexible. Importantly, Intergen is helping ChristchurchNZ think about how the system will work, which is something we don’t really have time to do. Intergen does the strategic thinking and offers us recommendations, which works well. The team is always helpful and we’ve made good progress with them. We’re entirely happy with Intergen and the ongoing support provided by the team.”