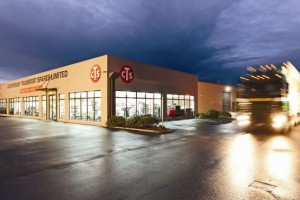 Established in 1983 and based in the Christchurch suburb of Hornby, Canterbury Transport Spares (CTS) is a leading supplier of heavy truck, bus and trailer parts. For nearly 30 years the company has sourced parts from around the world for customers across New Zealand and the Pacific Islands – and managed the business using a local developer’s DOS-based financial system.

However, in early 2011 CTS general manager Michael Swinburn says a range of performance issues forced a system change. “The major issue was the inability to enter data quickly,” he says. The system was also particularly poor at foreign exchange and managing overseas creditors and shipments. The result was a lot of manual data entry and no central repository of information.

Swinburn says CTS considered both off-theshelf and bespoke software but a recommendation from an Australian business contact put Pronto ERP and Velocity Global at the top of their shortlist.

“Pronto off-the-rack had most of the capabilities we were after. This meant we could move to it quite quickly, and as a result the project could be deployed fast.” Initial requirement briefings with CTS enabled Velocity Global to demonstrate how the Pronto ERP suite would be a close fit with the parts supplier’s needs says Swinburn. “I detailed all the areas where I wanted to improve the business and make it more administratively efficient,” he says, “and I was impressed with the demos. It quickly became apparent that out of the competing software applications, Pronto would deliver the most benefit for us.”

Implementation was quick – from initial consultation to completed deployment in under six months. Previously an audit accountant, Swinburn says he had seen plenty of ERP transitions “go pear shaped” at client companies, but the installation at CTS was relatively trouble free.

“Implementations are always stressful,” he says, “but I’m very happy with how ours went – all the key things that needed to work, worked immediately.” Once in place, Pronto quickly proved its worth in enabling CTS to better deliver on its company credo of being ‘able to identify and deliver the right part, first time’. With around 90,000 line items in its range, cross referencing parts had been difficult – but was available out-of-the- box with Pronto. “We’ll hold a part under our own number,” says Swinburn, “but it will have an Original Equipment Manufacturer (OEM) number as well.

Often a customer will quote an OEM number or product dimensions, meaning counter staff had to use CDs and parts manuals to serve them.” Pronto has automated the importing of product data so CTS can load multiple cross-references against one product number meaning point-of-sale staff can find an item very quickly.

Although CTS has been in his family since its foundation, Swinburn says Pronto has been able to provide him with insights into the business that were never before possible.

“Using Pronto and Yellowfin [Business Intelligence – also supplied and implemented by Velocity Global] we’ve developed dashboards so that when I’m away from work I can quickly look on my iPad and see what’s happening in sales – which areas are performing well and what product range needs attention. I can drill down and find out exactly what’s going on.” One interesting insight has been an accurate analysis of any product’s contribution to profitability. “When you think about some of the low-margin items that we compete a lot on price with, you tend to think they’re not big contributors,” says Swinburn. “But now we can see more clearly how quickly they’re turning over and you realise they’re actually making a good contribution to our overall bottom line. And of course it’s highlighted areas where we’ve got a significant stock holding and got us thinking about how we can get that turning over more or perhaps just trim back our stock levels.”

Pronto’s capacity for foreign exchange calculation on parts imports has also proved invaluable says Swinburn. “Our old system couldn’t handle foreign currency translation,” he says, “so the inventory and purchasing just showed the NZD amount. But over the last couple of years the exchange rates between NZ, the UK and Europe have changed dramatically.

So now to be able to compare suppliers based on up-to-date exchange rates is really helpful. For example, with the pound being so weak these days a lot of British suppliers are now looking more competitive – compared to, say, product sourced out of Australia.”

Cash flow management is also greatly enhanced Swinburn observes. “If you’ve got a couple of containers coming in at once, you can be up for a large amount of cash,” he says.

“Previously we just used to total them up roughly based on what was on the purchase orders but now we’ve got far greater clarity. I have a much better idea of when peaks and troughs are going to occur in our cash flow and being able to automate our cash flow projections has been a real godsend.”

Swinburn says he next plans to apply the system to the customer side of the equation. “Ultimately we want to have a portal on our website using Pronto where customers can log in and get invoices and statements and so on. We’ve got Pronto CRM in place and we’re adding a lot of contact information and getting to know our customers – so as time allows I’d really like to apply that CRM functionality to its fullest extent. With Pronto and Yellowfin the amount of information we have and the tools we have to pull data out of the system is head and shoulders above where we once were. It’s saved us a lot of man-hours – our business has picked up but we haven’t had to increase staff levels. I think we’re only beginning to scratch the surface and I’m dreaming up reports all the time that I want to see in Yellowfin to better understand what’s actually driving our business forward.”

When disparate and disconnected legacy systems began slowing down its business, Digital Mobile turned to Velocity Global and Pronto for an integrated business management solution…

The one-stop bathroom company has seriously upgraded its financial, manufacturing and inventory systems with its new Pronto integrated system. It now has a clear view into its operations…

PRONTO gets TradeTools Direct’s inventory management up to speed