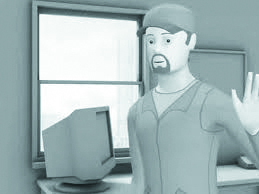 Many readers will recall a few years ago when the “social media guru” video hit the interwebs – it’s worth a quick watch (scan the QR code opposite) but for those who haven’t seen it, suffice it to say it was all about a fictional social media consultant who went into an established organisation to show them how to “do social”. Chaos ensued and the organisation was left paying a lot of money for very little of value. While a fictional tale, it is, alas, one that is played out far and wide within large organisations that feel threatened by all the cool kids gaining mindshare through social media and want a piece of the action.

Now, I never have been, wouldn’t profess to be, and hope someone would push me off a bridge if I’m ever tempted to become, a “social media guru” but, at the same time, I am someone who spends a lot of time on social media, have managed to build something of a following, and have leveraged social tools to build a presence – all from a lifestyle block in rural North Canterbury. In so much as that gives me a credible platform to espouse from, I thought I’d share my views on social media for business. Here it is: it’s just communication. Frankly, that’s about it.

Perhaps our most well known tech success story, Xero, built its early reputation through the regular blogging of its co-founder and CEO, Rod Drury. Back when Xero was a completely unknown business, and Drury was only known by a small, close-knit group of tech people, the company built a strong presence via the insightful, sometimes opinionated, and regular blogging (and later tweeting) of Drury. There were no social media strategy, PowerPoint presentations (at least I strongly assume not) and no PR firm handled the Xero or Drury social media accounts. It was simply a collection of off-the-cuff, honest and engaged missives from someone intimately aware of the business and the environment it worked within.

Having been on the receiving end of some of the more brutally honest comments from Drury, I can confirm that sometimes genuine social media is bruising. But no more bruising than the raw conversations that happen over a good old Kiwi BBQ or beer with the lads.

And this really gets to the crux of the matter. If we look at the fictional, but realistic example of the social media guru video, we have a situation where a large business thinks it can outsource its social media involvement in the same way it can outsource its PR functions. Alas, it cannot. Having a consultant tweet or blog on your behalf is akin to having a handler answer all your questions at a family BBQ – it makes the conversation stilted, inauthentic and unnatural. It does nothing to make you or your organisation feel like someone at the center of the conversation and it harms the brand you’re trying to portray.

Really, social media is pretty easy to master. Be open. Be Honest. Take criticism with good humour. And make the people at the end of the line feel like they’re having a conversation, not being talked at. Your social media presence is an extension of yourself and your company. It’s a tool to articulate your culture, your values and your humanity. Don’t try and turn it into a machine, and don’t think you can come out of the blocks and succeed from day one – like all good things it takes care and nurturing. And if you ever want a chat, hit me up on Twitter. Just don’t expect my stream to be polished or on-message, that’s not the idea….