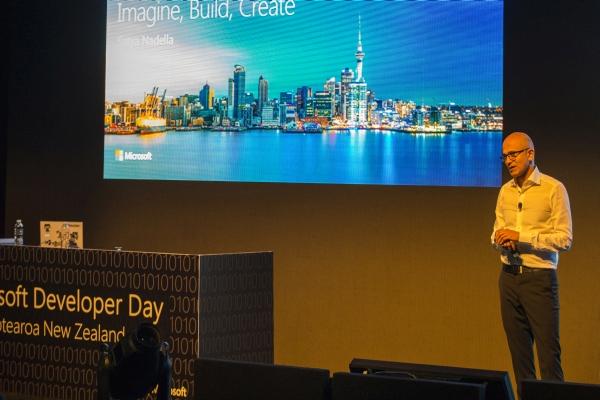 When it comes to strategic delivery, Microsoft’s CEO Satya Nadella has what it takes. He’s steered the ‘beast of Redmond’ in a far more interesting direction than it ever went under Steve Ballmer – but the harsh reality is that the former lacks the stage presence of the latter.

We know this because Nadella was in Auckland yesterday and gave a keynote at the vendor’s Developer Day, a day as implied, where software developers are feted and shown the latest greatest that Microsoft has to offer.

Introducing the top man to the stage, Microsoft NZ MD Barrie Sheers said the task which awaits developers is as simple as it is profound – go out and change the world (we’ve long held the Arthur C. Clarkian view that sufficiently advanced technology is indistinguishable from magic and we tend to believe it is in the software that the charm lies. So, hyperbolic as it is, we’re OK with that).

And that’s a message Nadella went to work driving home, in his calm, measured way. He said Microsoft wants to empower developers to achieve more and wants to achieve more developers. “It’s not about our technology, it is about what others can do with our technology. And when you talk about it in that sense, that’s probably where developers are the most interesting conversation to have.”

Harking back to the company’s early days, Nadella said the first product ‘Bill’ created was a BASIC interpreter for the Altair. “A lot has happened since then, but in there a sense of who we are is captured. That’s what got us started. Now we express ourselves in a very different set of technologies which are rapidly changing, and our world view is shaped by the fact that every business will be more and more digital.”

Nadella pointed out that ‘there isn’t a retailer or manufacturer or healthcare business which thinks of its industry only; these companies increasingly have digital content in how their business model works, and that creates opportunity and responsibility for the developer.’

Whereas in Ballmer’s day, Microsoft was a packaged software company with a predominant focus on the desktop, in the Nadella era it spans everything from desktop through to the back-end applications and even infrastructure. All digital, of course.

That makes for a unique (and that’s unique in the proper sense of the word, not the marketingspeak) place in the market, as noted by Gartner analyst Nigel Montgomery, who recently told iStart, “Remember that Microsoft is the only ERP vendor which can also deliver [these] services. If delivered as a single set of services, Microsoft has a very strong, arguably the widest, offering for mid-market companies.” This enormous reach also provides a hint of the scope of opportunity which is presented to the software developer working with Microsoft’s technologies.

Nadella went into some detail around what the company means with its ‘cloud first, mobile first’ mantra. “It’s not just about devices, but all the computing surrounding our lives – glasses [like HoloLens], things in our ears, sensors everywhere, small screens and large ones. It is about how the experience moves across this rich computing fabric, with cloud as the control plane.”

For developers, he said the ‘richness of data’ makes it interesting in terms of opportunity; in a world where there will be increased business process automation, there is “a need for a componentised workflow-driven approach; that is Dynamics 365, where we expose the data structures to allow developers to customise for locale, industry and process. When you take a software as a service approach, that is where developers can get the most leverage and market reach.”

And, of course, Nadella talked up Microsoft’s cognitive services and ‘mixed reality’ (which were heavily punted at the recent Ignite event), like Cortana Intelligence Suite and machine learning and HoloLens; with these technologies tending to enter the market at the consumer end of the spectrum, he took pains to point out that they are not only applicable to ‘consumer internet companies’.

“Cognitive services is the equivalent of the Visual Basic moment in the AI era,” he said (we assume developers know what that means). “The VB moment democratised software development, bringing down the barrier to building sophisticated client server applications. We’re now bringing that to the AI and machine learning age, which will drastically change the type of and capabilities of applications you can build.”

As for the tepid, dare we say accountant-like, delivery of his messaging – it’s a reasonably sure thing that no-one who matters would care, because under Nadella’s leadership, it is the delivery of strategy where the real difference is being made. And the company’s share price recently blew through its highest levels ever.