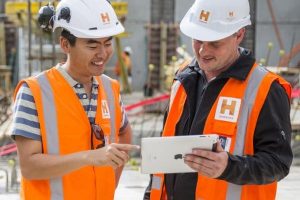 Realising that accurate, up to date information is the key to success to optimise margins when managing large, complex and difficult projects involving multiple parties, Hawkins has implemented an analytics solution that provides rapid insights into key performance areas. With its investment in the Microsoft technology stack, the company has selected PowerBI, implemented by Intergen – and while it is early days for analytics at Hawkins, the company expects a substantial return on investment.

Founded in 1947 by Hamilton builder and entrepreneur Fred Hawkins, construction company Hawkins has earned a reputation for being ‘big enough to tackle anything, but small enough to be agile’. The company specialises in the delivery of transformational projects across New Zealand, including stadiums, hospitals, event centres, art galleries and more.

On 1 April of this year, Hawkins was acquired by the Downer Group, an ASX-listed provider of services to customers in markets including: Transport Services, Technology and Communications Services, Utilities Services Engineering, Construction and Maintenance, Mining and Rail.

The situation
Large-scale construction projects constitute the biggest part of Hawkins’ business and in this line of work, margins have to be managed expertly and with a keen eye for detail, explains Hannes van Zyl, Hawkins CIO.

With all reporting done manually, it took a lot of time and effort to produce insights that would give managers the ability to know how projects were performing on the ground. “Effectively, we’d spend a large portion of the month getting the reports done; by the time that exercise was finished, the information was outdated and there was no time for in-depth analysis,” says van Zyl.

The solution
Initially, the business came across a market solution that, while capable, was expensive and not an ideal fit for Hawkins. Van Zyl explains that this solution, while targeted specifically at the construction industry, was too narrow in focus and did not fit with the Hawkins IT strategy. But it did help to demonstrate the value of BI. “As an all-Microsoft shop, we’ve done a lot of work focusing on one vendor for ease of integration and interfaces,” he confirms.

After conducting a five-year Total Cost of Ownership study on several products which fit well within the Microsoft stack (all of which were on Gartner’s Magic Quadrant for BI vendors), van Zyl says it was a no brainer to go with Power BI. “That was not only the most affordable, owing to existing investments in Microsoft technology, but also the most capable of meeting our needs.”

A similar assessment of implementation partners saw Intergen ‘come out tops’. “We wanted a complete cloud service across the Microsoft board; not just the BI platform, but the whole information flow.”

The results
With the project recently completed, the immediate results show that reporting is far better for Hawkins than it has ever been: accurate, insightful and delivered on-time.

The potential performance improvements and business benefits are substantial. “We’ve only just signed it off, so right now I can only speculate, but I believe the return on investment will be substantial,” says van Zyl.

He explains that this will be due to improved and standardised reporting, underpinned by consistent data and definitions. “In the construction industry, the risk of getting things wrong is high – that will now diminish as we will have near-real time information, presented in a format that everyone from an executive, to a manager, to a quantity surveyor can understand.”

In the construction industry, the risk of getting things wrong is high – that will now diminish as we will have near-real time information, presented in a format that everyone from an executive, to a manager, to a quantity surveyor can understand.
Hannes Van Zyl, CIO, Hawkins

With information available immediately, and in some cases now updated as often as three times per day, anomalies or issues immediately stand out and can be actioned. “The project managers can’t ignore it, as the system makes sure it stands out. The user can drilldown and find out exactly what the issue is – whether it be a supplier who hasn’t delivered materials, or a subcontractor who is falling behind. Issues can be identified by region, or by project, and in a matter of four or five clicks, the problem can be pinpointed.” This defuses the risks of large, complex and difficult projects involving multiple parties.

This is a competitive differentiator for Hawkins; Van Zyl adds that future plans for its analytics could include predictive analysis. “In time to come, yes, we could have the ability to move towards predictive analytics to assess project costs based on successes of similar ones in the past,” he concludes.