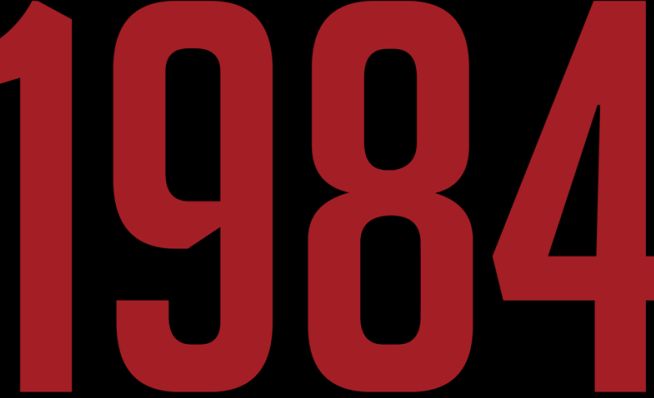 1984 was the year Apple introduced the Macintosh computer with the infamous Super Bowl ad by director Ridley Scot (Blade Runner etc), in which a woman sprints between aisles of chanting, uniformly-miserable-looking shaven-headed men and throws a big hammer into a screen on which a massively-projected Big Brother face exhorts the men to more uniformity in pursuit of a utopia that, clearly, is for the bosses only.

The second ‘1984’ is the book Nineteen Eighty-Fourby George Orwell, of course. Thirty years on we live in a world that is both more and less like 1984 than we could have imagined at the time.

The ad is ironic, this many decades later, in several ways. Firstly, for long-time Mac users such as me (I got my first Mac in 1989, so I’m not quite as grizzled as some veterans), the ad established Apple firmly as the outsider, maverick company that produced a quirky personal computer called the Macintosh. Nowadays, when people think of Apple, the first products that spring to mind will most likely be iPhones, iPads or even iPods – all things that catapulted the ‘Think Different’ Californian tech firm into the mainstream. But to long-term Apple fans, the Mac is still the most important thing. We happily use iPhones, iPads and we used to have iPods too, but it’ll be our Macs you’ll have to pry from our cold dead hands … and good luck with that. One of the main reasons I have an iPhone and iPad is because it syncs with my Mac, still the beating heart of my digital existence.

Secondly, the ad tilts squarely at IBM, which had a massive corporate computing presence all over the globe back then. Steve Jobs actively sought to challenge this hegemony by taking computing power out of the hands of technocrats and making it available for you and me – a mission that has been incredibly successful. It wasn’t all that long ago that you needed a computer science degree to even turn a computer on, and now, thank goodness, we all have at least one computer and it’s probably in our pockets. I’m not saying this wouldn’t have happened without Steve Jobs, but he played a big role in making computing a genuine option for the masses.

But the irony is that within a few years, Apple was partnering with IBM for the processors for Macs: the PowerPC. I’d like to say this was because of Apple’s fluidity of management and foresight, but I suspect it was more down to IBM’s ability to flex and change with the markets after initial Personal Computer missteps and failings. IBM was widely expected to wither and die and look at it now – it’s still massive, still has its huge machines and data centres all over the globe and is still very successful, although operationally it’s a substantially altered beast in the twenty-teens. More recently IBM and Apple have partnered up so IBM techs can carry apps on iPads and iPhones into their jobs analysing, resetting and optimising IBM data installations. This, to me, is a very positive sign of Apple’s new maturity under Tim Cook, although who knows how long the deal was being worked through?

Thirdly, the 1984 Apple ad is riddled with surveillance tropes. Of course, that was one of the main themes of the Nineteen Eighty-Four book – everyone watched televisions that fed them streams of propaganda, like ‘the size of the chocolate ration has been raised from 25 to 22 grams!’ (seriously) and meanwhile, the TVs monitored the watchers, making sure they didn’t deviate from the regime’s regimens. We, of course, are all being surveilled too. It’s largely inconsequential and doesn’t affect our lives because, frankly, most people simply don’t care where you are, or what you are doing, at any given point of the day. But if there’s a crime nearby or you’re suspected of doing something, it’s a different story. Which can often be to the good, right? I mean, we all want offenders to be caught. That’s the second point of law and order, the first point being ‘please don’t offend’.

But many feel wronged that they’re under surveillance. It’s not just the CTV and traffic-light cameras. Google is collecting data on you, so is Facebook, and your device is probably being monitored to a greater or lesser extent, all of the time. But there’s a counterpoint, and that counterpoint is you. You also have a surveillance device on you. A civil or civilian misdeed is as likely to be captured on one if not dozens of camera-equipped devices at any time of the day or night anywhere in the world, helping bring them to order, too.

Anyway, how to wrap up this meander through Apple Mac and Orwellian history? With designer clothing, of course. Yes, that’s right – a London-based designer has created a set of clothing modelled on the clothes Orwell describes in Nineteen Eighty-Four, and there’s a delicious twist quite apart from the stylish, utilitarian weave of the fabric. It also has special clip-in pockets that make your device go completely off the radar. Zoltan Csaki of The Affair designed the UnPocket to go with a new line of clothing called ‘1984 Stealth Fashion for the Under Surveillance Society’.

He raised a Kickstarter (to which I contributed enough for a pair of pants and a jacket) and the line is now in production.

I can hardly wait! (And no, I don’t wear designer clothing normally and I don’t kelp kickstart anything. But this venture really appealed to me, probably for all the above reasons.)