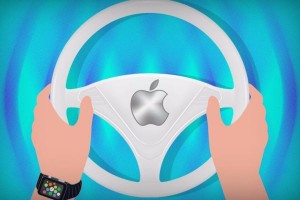 Apple has pioneered oh, lots of things. What does the latest crop mean for the future? Mark Webster ponders this question 39 years after Apple was founded…

Apple launched the Apple Watch and a new MacBook in March. The new MacBook really is just that – the first MacBook in a long time which doesn’t have something else after its name (ie, the moniker is not followed by Air or Pro). The all-new MacBook, slimmer, thinner and, er, less-powered introduced a couple of entirely new features: a controversial single port for everything, including charging, and a new trackpad.

Apart from all the usual increased miniaturisation and tech, it’s the name of the new trackpad that’s piquing interest. It’s called the ‘Force Touch’ and not ‘ForceTouch’. This new naming scheme is gradually taking over – as with ‘Apple Watch’, you know, two separate words instead of two words stuck together with a capital defining the difference. So the days of MacBook, iPod, iPad, iPhone, iTunes and iLife et al may be numbered.

The trend’s most significant example is Apple Watch but it looks like it’s going to grow throughout the Inc; apparently Apple’s marketing people are considering a new line of laptops called Mac Books, new iPhones that will be called Phones and a new Mac Pro that will be called Pro.

A new iMac might be called All In One Computer or, better perhaps, A Computer. It makes A Car all the more possible. Would you buy A Car? Many would.

The marketing department set up to devise all these new monikers is, internally anyway, and in line with Apple’s new naming guidelines, known as the Fool Team, but you’d think it should be called The Department of Really Boring Names. However, before you laugh, it gets weirder. Apple likes to do things both big and comprehensively, and the rumour goes (spotted in patent filing 01042015) that Apple is simplifying things still further with plans to trademark the letter ‘a’. I know this sounds crazy but it’s actually logical. It’s the first letter of Apple, of course, and it’s a little more recognisable, internationally, even than the distinctive and eponymous Apple logo. While it sounds impossible to trademark a letter, it actually makes sense: the trademark would only apply to the letter ‘a’ at the beginning of a sentence, with a space after it and only when it’s written in the font Helvetica Neue, Apple’s latest do-everything typeface. Suddenly, a brand like ‘A Computer’, ‘A Car’ and ‘A Phone’ makes a whole lot more sense, right? (Have you seen Marc Newson’s concept car that some think may be like a car Apple could design? Newson worked for Ford but was hired by Apple last year.)

My only real reservation about this potential new branding is the use of the typeface Helvetica Neue. It’s very refined and simplified, and many designers find it classic, infinitely usable and readable – kind of like Jony Ive, Apple’s design maestro. Others, myself included, find it quiet, boring, overused and systemically devoid of character. Kind of like … anyway.

Meanwhile, in the digital stakes, Apple’s programmers never rest. Apple has been enrolling developers into an augmented reality team. The latest beta of iOS, 8.3, has had tweaks to help Siri understand the New Zealand accent. If it can understand our Prime Minister, it has to be a triumph for voice recognition and I offer them my sincerest congratulations. If you have the beta, maybe you could try asking it something like ‘Who is the new King of the North’? If it answers ‘Winston Peters’ – huzzah! That’s progress.

But of course, Siri is undergoing a lot more development than in just trying to make sense of the New Zullen uksunt. We’re hardly big players on the world scene, and Siri has bigger fush to fry. Apple has been hiring virtual reality engineers as it specifies and tests ‘novel display systems for virtual environments’. Siri might be getting eyes some time soon – unless Apple is talking about ‘A Eye Implant’ for Apple users, anyway.

Siri, so the rumour goes, is developing well beyond just voices into digital ‘friendly’ personalities. One day you won’t be just choosing a voice for Siri, but a digital companion with a distinct personality that suits your needs. Testers are said to be playing with digital beta models of Urbanite, Farmer, Trekker, Sportif, Hipster and, for the more traditional, there’s Husband beta. I’m not sure if there is going to be a World beta with this, but Apple has always had the resources and acumen to make things happen on a grand scale before, and it certainly has changed our lives. Even if you’re not an Apple user, you’re most likely using a smartphone, tablet and even a computer that owe a lot to Apple’s efforts, no matter the brand name. Am I the only one who finds the ‘Galaxy S6’ incredibly iPhone 6-like? I doubt it. I’ve held one and it’s uncanny. Actually, I should say it’s canny – especially if it’s going to be cheaper.

Thirty-nine years of Apple! Even to a fairly long-term user like myself (since 1989), that seems like an awfully long time. Apple, don’t you know, was founded on April Fool’s Day 1976 by Steve Jobs, Steve Wozniak, and Ronald Wayne, but despite that the Inc has never indulged in April Fool’s Day pranks, unlike other tech companies.

But: welcome to A Pril on Apple Matters!