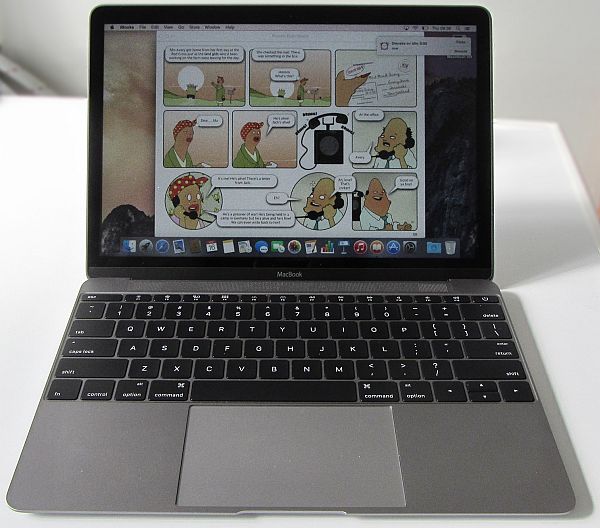 It’s not just an appellation the all-new MacBook is missing. There is no ‘Pro’ or ‘Air’ after ‘MacBook’, and also no ports. Mark Webster finds himself wondering who it’s for…

For NZ$2000/A$1799, would you buy one of these? I’m not sure. You have probably heard that in Apple’s never-ending quest to slim its tech, this new laptop only has one port (apart from the headphone jack). One port! You can’t charge and have anything else plugged in at the same time. On the immediate face of it, if you want this kind of lightweight (by which I mean light-in-weight, as well as having an anaemic CPU) Mac laptop, why wouldn’t you go for a MacBook Air? For around $300 – that’s $600 cheaper – you get an extremely portable, very slim Mac with all the usual Apple advantages (built-in software, design smarts) plus a lot more: a separate charge port; two USB 3 ports; headphone; dual microphones; Thunderbolt 2 and even a slot for an SDXC card in the larger 13-inch model.

For less money, you also get faster 1.6GHz Intel i5 dual-core CPUs, which to me sounds more attractive than the MacBook options of either 1.1GHz or 1.2GHz Intel ‘M’ dual-core processors.

So you have to wonder what Apple is playing at here. Where exactly does this MacBook fit in? If it were cheaper, I think the form factor and the specs that necessitates would be less troubling. Also, I have to wonder how much cynicism is involved in that single port – is it just a ploy to sell you more adapter dongles? All that palaver adds more of your income into that already-questionable price point.

On the upside, you can choose it in silver, ‘Space Gray’ (sic) or gold. Is that actually an upside? I’m not convinced. Is this new computer a fashion statement or a Mac laptop? But fashion statements seem to be where Apple is heading, what with all those versions and combinations of the Apple Watch up to the truly ridiculous big-noting solid gold version.

Hey, at least you can match a MacBook to it now … the question is, am I missing the point here, or is Apple?

There are, however, more upsides to the MacBook. It’s beautifully made, and looks and feels much more ‘professional’ than I thought it would. It’s no budget build, despite its slow processor and lack of ports. The keyboard is a joy to use, running edge-to-edge of the entire body to give you nice, big (a millimetre bigger), and very thin keys, yet they deliver very responsive-feeling keystrokes. The keyboard lighting is really nice too – instead of lights emanating from beneath the keys, as has been normal on MacBooks for years when the light drops, the MacBook has individual LEDs in the keys so the actual characters do most of the glowing. The characters glow on older MacBook Pros and Airs too, but there’s hardly any under-key spill on the new MacBook, partly from the new lighting scheme and partly because these keys are so slim-line, they’re barely raised. It’s a lot more attractive.

The haptic thing means the trackpad doesn’t actually do a physical click, but it certainly does feel like it’s doing a physical click. Apps will soon be available that let you ‘draw’ on this with pressure sensitivity. A new feature lets you attenuate how the new Force Click attribute works – in System Preferences under TrackPad, it will only appear if you have a MacBook or the very latest MacBook Pro 13-inch. Force Click means you click-and-hold, pressing harder, over something like a word for more info, kind of like the Control-Click or Right-Click you’re probably used to. World beating feature? Not really.

In System Preferences, you can set Force Click to require light, medium or heavy force. Although I have to wonder how much wear and tear will eventually result for users who choose the ‘heavy’ option.

So while it’s a very beautifully built and satisfying to use little MacBook, I find it sits in an uneasy space. With virtually no ports, it’s going to need wireless everywhere you go to connect and to move files, or you’ll soon find yourself travelling festooned with dongles and adapters (in which case, save your money and your patience and get a MacBook Air). But despite its obvious shortcomings, it’s no budget machine aimed at those on budgets. If I was to drop 2K on a MacBook, I’d either be speccing out an Air with a bigger screen and ports enough, or I’d be seriously considering the 13-inch MacBook Pro which has the new trackpad anyway, is much faster, CPU-wise, and has even more ports. These start at NZ$1699/A$1549.

I suspect sales of this thing won’t be stellar, but the strides Apple has made in the all-new haptic-feedback Force Touch trackpad, battery life, the new keyboard and the all-round very solid, slick construction will migrate into Apple’s worthier portable Mac offerings, and that can only be a good thing.

Is this a question of ‘duty now for the future’? A new MacBook Pro with these design, trackpad, keyboard and battery advances is going to be sensational, but for now, I think it’s a niche product looking for a niche.