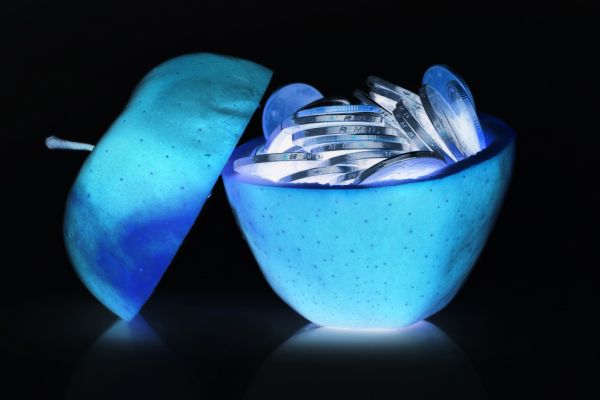 I’m not. It’s not very often the analysts have to justify more than the first few letters of their job titles; they were mostly out by 3-6 percent, apart from Piper Jaffray’s Gene Munster, who was about right for a change (he’s usually a bit optimistic when it comes to Apple).

However you look at it, it sure was one hell of a quarter: Apple made US$18 billion in profit on its record-shattering US$74.6 billion in revenues. That’s 30 percent up on last year. That’s almost the same as Microsoft’s if you add Microsoft to Procter & Gamble and IBM, that is – then you get US$72.7 billion. For this was not just the best quarter Apple’s ever had, it’s the best quarter any company has ever had. Apple overtook the previous record holder, Exxon, which formerly held the top position with a $15.9 billion profit.

Not surprising, perhaps, was how Apple made its profit: iPhones. I recently bought one myself at the Apple Store near Union Square in New York. This was the drill: walk in, tell someone you want to buy an iPhone, get directed to the back of the queue (20 people ahead of you). At the tail-end of the queue, you’re asked what you want exactly, and you’re issued a ticket, wait in the queue for about 20 minutes. When it’s your turn, an assistant says “Hi!” and disappears off, comes back with your phone, you pay with a credit card via their iPhone-connected gizmo and walk out with your package.

Now replicate this experience for all opening hours in all Apple Stores around the world, factor in all the iPhone-selling Apple Resellers, plus the telco carriers … around the world. Apple has been selling 575 iPhones every minute of every day, which neatly mirrors Apple’s revenue: 575 … thousand dollars… every minute.

Just as surprising, though, was Apple’s Mac sales figures, given all the attention seems to be on iDevices. Do you remember when Steve Jobs declared the PC era was dead? Well, the PC has come back to life, at least for Apple. While other personal computer sales declined everywhere over the last four years, Apple’s stayed solid and even rose a little. And they just rose again: in fact, Mac sales were at an all-time high of 5.52 million units, just ahead of the company’s previous best in the preceding September quarter. This represents a 14 percent year-over-year rise in Mac sales, and this against almost any expectations anyone had. Apple CEO Tim Cook, who famously claimed a few months ago that he does all his work on his iPad now, reckons that’s not a problem, making a reference to his “clear view” of the “road ahead”. Personally, I like my iPad as a kind of viewer on the world. But would I use it for serious work? Not a chance.

Weirdly, through all this ‘end of the PC era’ stuff, iPad sales kept declining. They fell to 21.4 million units in the December quarter, down 18 percent from the same period a year ago.

In other numbers, the rest of the world is increasingly important to Apple: international sales accounted for 65 percent of the quarter’s revenue.

Another potentially strange fact is that most iPhone 6 buyers are new to iPhone – only a small percentage of total iPhone 6 sales are iPhone 4 and 5 users upgrading. You can appreciate why Apple feels so bullish on this, because many of those existing iPhone 4 and 5 users will eventually upgrade to 6 as well. It’s not as dramatic, but even the declining iPad is still finding large markets of entirely new users: a full 50 percent of iPad buyers in the US, Japan and UK. Meanwhile, IBM, which partners with Apple in enterprise and service apps for iPad, stated that iOS devices are responsible for twice the online traffic and four times the commerce sales of Android-based devices. Android-based devices can do this, so why Android users don’t is a mystery Google is probably still trying to solve.

The China market is the biggest boom market for Apple – there, over 70 percent of iPad buyers are new to iPad, according to Cook in the earnings call.

Revenue grew in all sectors, but that from China rose from US$9.5 billion in the first quarter of 2014 to US$16.1 billion for the first quarter of 2015. For Apple, China has already almost caught up to Europe. In China, iPhone beat out Samsung and the rising local handset manufacturer Xiaomi. Apple plans on having 25 Apple Stores in China by 2016.

By the way, Apple just rolled out updates to Mac OS 10.10.2 ‘Yosemite’, and iOS 8, and even Apple TV. These are all free updates. Apple has sold 25 million Apple TVs, and 21.4 million iPads since it was launched (five years ago this January). With the iPhone figures added to the iPad numbers, that’s one billion iOS devices sold. The billionth, a space-grey 64GB iPhone 6 plus, has been retained at Apple’s HQ in Cupertino, California.

Oh, and Cook said the Apple Watch would be available from April. Meanwhile, Apple Pay is growing daily in the US – it lets people pay for products and services with their iPhone instead of credit cards. Oh, all the things you could do…!